It seems to be a quirk of creative types to be accoutred with a cat – or several. Writers are particularly prone to cats – Ernest Hemingway’s collection of polydactyl cats being perhaps an extreme example – but the link is well-documented in both word and image, albeit not entirely understood. 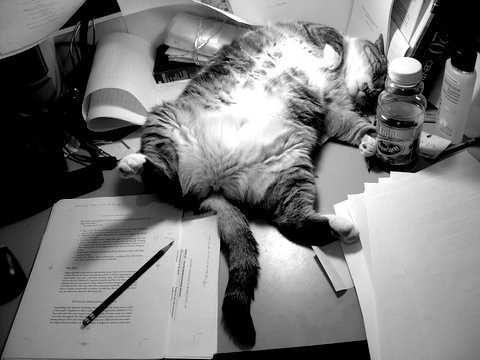 “A catless writer is almost inconceivable,” says Barbara Holland. “It’s a perverse taste, really, since it would be easier to write with a herd of buffalo in the room than even one cat; they make nests in the notes and bite the end of the pen and walk on the typewriter keys.” But not all writing cats are so unhelpful. Kerry Greenwood says she has “a censorious cat called Belladonna who supervises the process and won’t let me write more than two hours without a break. She slyly hits the caps lock with her little black paw. Thus I am saved from carpal tunnel syndrome and she is well supplied with cat treats (those expensive green ones).”

It’s the same with knitters. As Stephanie Pearl-McPhee notes in her book At Knit’s End, “the tendency to be accompanied by a cat is an oddity among knitters that cannot be explained…. Most cats have a thing about knitting. They are honor sworn to pester knitters and be involved in knitting as much as possible. They lie on patterns, play with balls of yarn, bat at the end of a moving needle, and given two seconds of opportunity, will spread themselves all over your knitting, intentionally shedding as much fur as possible. When selecting a cat to share my life and knitting with, I will consider choosing one whose fur doesn’t contrast with my favorite color yarn.” 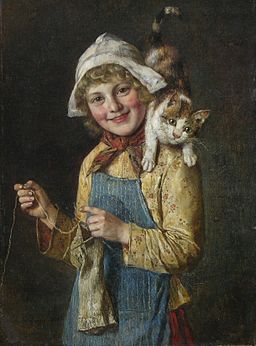 My cats know better than to play with an active ball of yarn (though you can see the temptation growing on them as they stare at it) but they do like to be in a lap that has knitting on it. The more mature of the two is happy to just sit alongside the knitting (she’s the one who’s a fibre snob), but the junior seems to think his life will not be complete until he has somehow climbed into the needle-portal and merged his dimensions with those of the knitting. I live in fear of ending up with a Klein-bottle-sock-cat (which isn’t a Dr. Seuss book, but should be).

Then there are sewing cats. Cats love sitting on rustly paper. Newspapers are better than books or magazines, and the delicate tissue of pattern paper is even better. Add the plethora of textures afforded by fabrics, and you have an irresistible cat-magnet. Leimoni Oakes, aka the Dreamstress, has a whole category of blog posts dedicated to the ‘assistance’ of her sewing-cat Felicity. The blog at Cation Designs has both a tag and a tab about the dedicated sewing-cat and model Walnut. 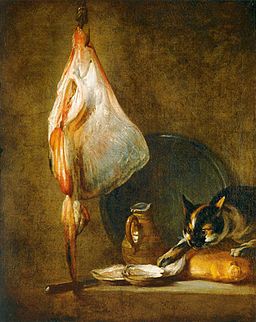 There are also cats who dwell with artists, no doubt taking every opportunity to filch food from still life compositions, leave little painty footprints about the premises, and bat shards of stone across the floor to where an unsuspecting foot will encounter them. (Cats are very thoughtful in that respect).
Doubtless there are many more examples of cats and their creatives, which simply don’t happen to have come to my notice (but please mention them in the comments).

Whatsoever your hand findeth to do, you can pretty much guarantee that your cat will climb into it. Knitting? Yes please. Sewing? Let me help you pin that down (with my claws). Reading? I’ll hold the book open for you (by lying on it). Hanging out the laundry? I’ll turn unintentional back-flips while trying to uproot the washing-line pole (since you won’t let me play with the pegs). Pruning? I’ll hide in the bush and dab at the secateurs as they come past. Playing pétanque? Let me lurk on the sidelines and dash madly into the path of the steel balls as you hurl them. Cooking? The floor will seethe with cats at every turn, especially if you’re cooking anything animal based (although one of our cats will eat bits of raw kale that have fallen on the floor – if she thinks you’re not looking). 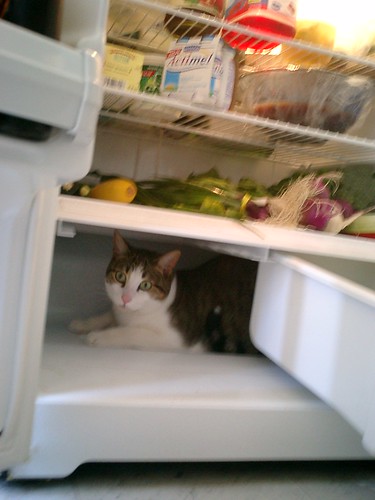 Why it is that cats do this is unclear. Boredom? It’s hard to bore an animal that is content to spend its days eating, sleeping and licking itself. Are they offering support? Are they offering – or seeking – companionship? Or do they merely wish to come between their person and anything that might look like it’s getting more attention than they are? Whatever the reason, it seems the attentions of a determined cat are inescapable, so we might as well accept them for the furry little joy-bringers they are, and do our best to get on with life despite their ‘help’.

This morning the promised fountain pen arrived on my doorstep. Joy, rapture, et cetera. It looks like this, if you’re curious.

In honour of this auspicious day (auspicious: from the Latin, meaning good-looking entrails), here are a few of my favourite quotes about writers and their pens. There is neither lighter burden, nor more agreeable, than a pen.
Petrarch

I’m not happy unless I have a pen in my hand, it’s really that simple.
Anthony Horowitz

My two fingers on a typewriter have never connected with my brain. My hand on a pen does. A fountain pen, of course. Ball-point pens are only good for filling out forms on a plane.
Graham Greene

In a mood of faith and hope my work goes on. A ream of fresh paper lies on my desk waiting for the next book. I am a writer and I take up my pen to write.
Pearl S. Buck

Do you have Deborah Kerr (or rather, Marni Nixon) stuck in your head now? Excellent. Let us proceed.

But who are you?

Not surprisingly given my usual subject matter, half are writers (or groups of writers) including:
one who dispenses dating advice (for men);
one aphorist;
one person setting out to offend everyone (a bit like Wowbagger the Infinitely Prolonged);
one whose poems consist of assorted words (either hasn’t quite got the idea or is making some kind of post-modern point, not sure which);
and one who I suspect is blogging as his book’s character but may in reality be in a lot of trouble with the law. How much is 30kg of cocaine worth, anyway? (Hullo PRISM!)

There are also two who blog about literature and books, and a press which gives rates for (among other things) ghostwriting and lists of agents/publishers you could approach (handy hint: get the Writers’ and Artists’ Yearbook from the library instead, it’s free).

Then there’s one set of relatives (hi Ma!) and five Pyramid Schemers (all with the same scheme, shows how good it is!) leaving eleven others.

The Others include an opera singer; a movie blogger; one who makes top-ten lists; possibly another pyramid-schemer (a more subtle one); a blog with a grand total of three posts (one of which was a reblog of my first post); and one which is completely blank. (Stage fright?) In short, an eclectic group.

So, now that I have, figuratively speaking, broken the ice, feel free to circulate and chat amongst yourselves. Have a drink, have a nibble, try to avoid being sucked into a pyramid scheme.
I don’t mind if you’re the life and soul of the party or part of the philosophical coterie in the kitchen, I’m glad you came.

I’d love to hear what brings you here, what you’ve enjoyed, and what you’d like to see more of. And if you have a great opportunity for me to make easy money and live the life of my dreams – sorry, but that would interfere with my delicately balanced regime of artistic suffering.

P.S. I realise I am somewhat behind-hand with the Artist’s Way posts. Great Things are afoot – but I promise I have not forgotten.